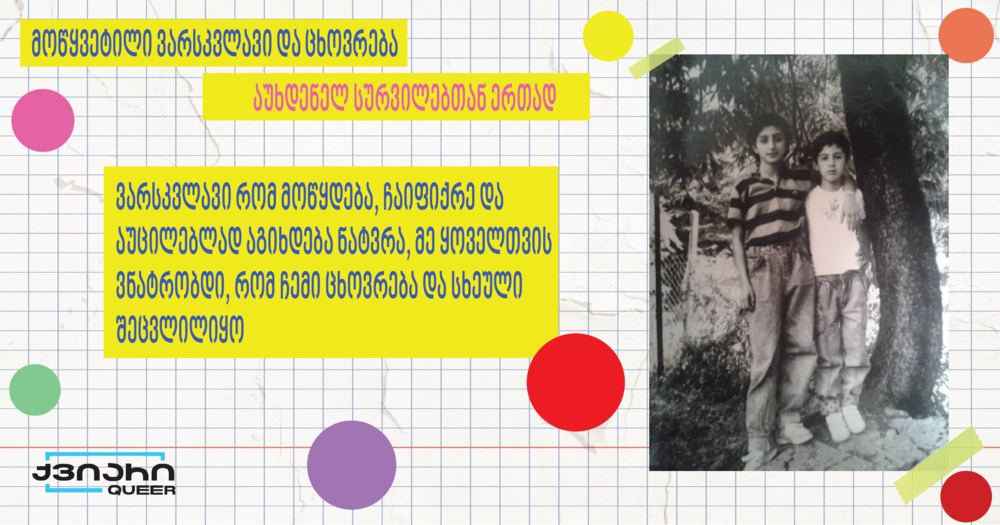 A Star Torn Away and Life with Unfulfilled Desires

I have never had a process of self-discovery, because I always knew that I was not female, but I remember when I was silenced and I was told not to talk, not to express myself, to erase myself and obey the instructions of family members, wear a dress, act like a girl, I always forced myself and tried to be more feminine. I had decided since childhood that my appearance needed to change, I knew I would grow up and it would all be a thing of the past, I would live in a body in which I felt more comfortable. I had a joke like this – when a star is torn away, make a wish and it will come true, I have always dreamed that my life and body would change.

Then I thought I was not living in my body, I was in someone else’s body and I was living another person’s life. Today, when I think I have a little regret for spending so many years in self-denial, I often thought that if not for the prevailing opinion about femininity and masculinity, that you must have breasts to be a woman, that you must have muscles to be a man, Maybe I would not have needed so much resistance. Nor waiting for the stars to fall down from heaven to make my dreams come true. 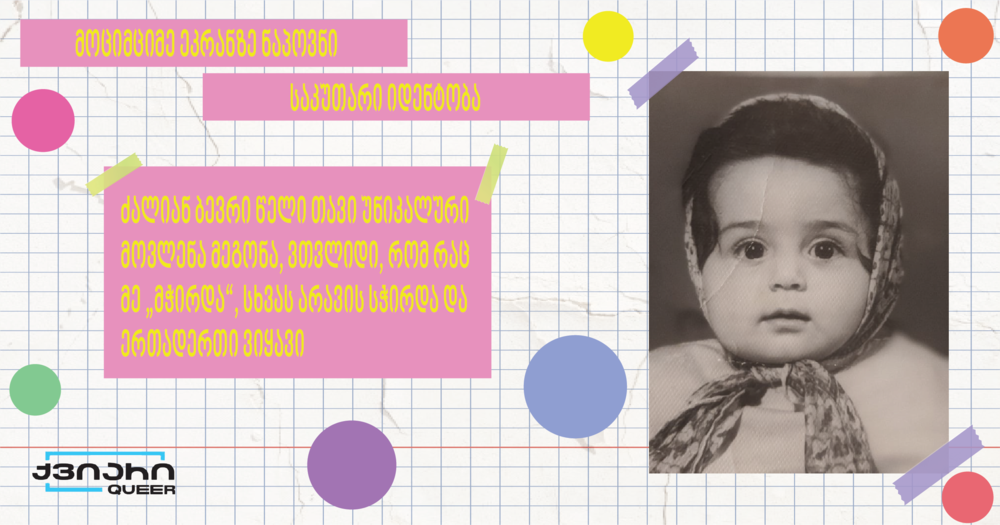 “Shocking Asia” and Identity Found on a Shining Screen

I was born in 1980, early childhood coincided with the Soviet “perestroika”, adolescence and the turning age with the collapse of the Soviet Union and the dark and cold 90s, there was no information about trans people at that time. Nothing about the transition process. I thought that what I “needed”, no one else needed and I was the only one.

Then the internet and computers appeared, I got information from Russian sources, but I could not identify myself with either gays or lesbians, I knew that a romantic relationship with a woman was not my main goal and I felt that there was something else that bothered me internally.

Once, I accidentally saw the documentary “Shocking Asia” on TV, after which I hoped to grow up, go to India, have surgeries and change my gender. The film is about transgender Thai women. But I realized that I needed similar surgeries. 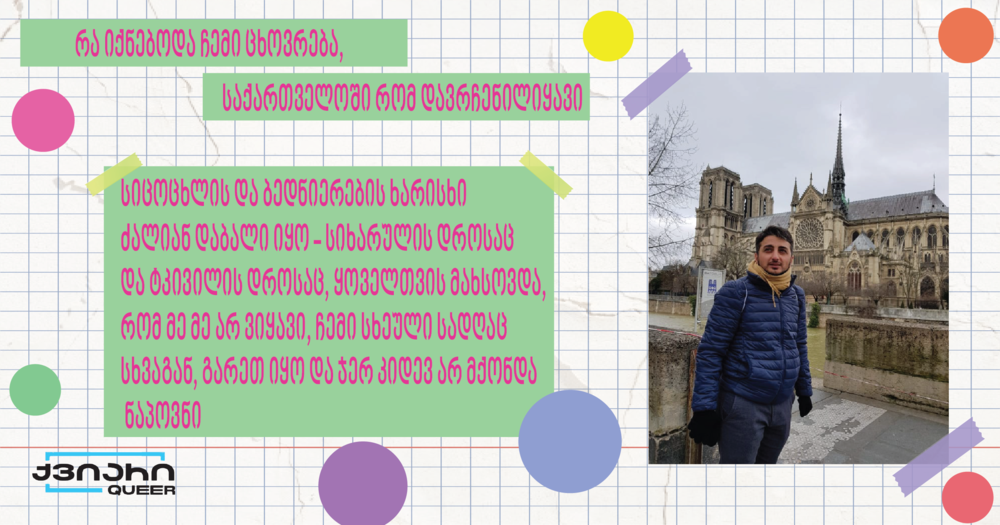 What Would my Life be If I Stayed in Georgia

I left Georgia for Spain at the age of 26, in 2006, I do not remember a single moment when I felt comfortable in my body, the quality of life and happiness was very low – in times of joy and pain, I always remembered that I was not me, my body was somewhere else, outside and I had not yet found it. As time went on, it became more and more difficult. As I got older, it all got harder as other age-related difficulties and challenges added to make the process more difficult.

I made the assumption that I might not leave the country and live in Georgia forever, but I felt that I could not live long in Georgia, at most, if I did not commit suicide until I was 40, I would definitely be killed by grief and hiding. I knew I would have a mediocre life. I did not even think about Coming out and transitioning in Georgia. For 26 years no one had come out, everyone thought I was weird, a bit hippy and progressive, different from the majority.

In 2006 it suddenly happened that I had to leave the country, I moved to Spain, I always knew that this day would definitely come, I would leave my homeland and move to another country, here I saw a transgender person for the first time and realized that the transformation process was approaching.

Earlier, when I started the transition process, in Spain it was necessary to have a psychiatrist’s conclusion, today this process is also simplified, no one asks for a psychiatrist’s conclusion that you are really a transgender person. It is mandatory to have an endocrinological and genetic examination, that your body is ready to start the transition process, that there will be no side effects to taking hormones, however, it is desirable, though not mandatory, to take a course of therapy with a psychologist who will take care of your mental state and prepare for big changes.

After the obligatory endocrinological and genetic examinations, I started hormone therapy in about half a year, at first this therapy was more intensive, then it was reduced, I did several surgeries after testosterone, including surgery to cut out the uterus and ovaries.

Testosterone is a complex hormone and is accompanied by many difficulties, the body undergoes significant changes, I have changed muscle mass, I felt that my bones were changing, I was very thin and I gained weight, I changed my shape, my nose and ears grew. I was told that hormone therapy was causing a change in character, I might have become more rude, but in my case the opposite happened, and I and those around me noticed that I became calmer. 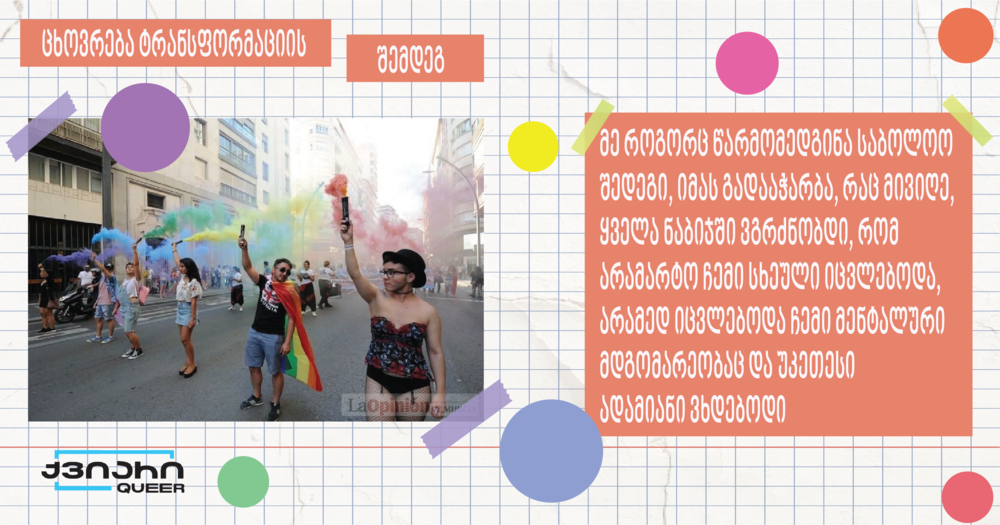 I often hear and have been asked: Were you a woman and toyu are a man now? What if you don’t want it anymore? What if you change your mind about it ? are you sure? Do you do it out of spite? Most of these questions are annoying, as if I was someone else and now I am different, I want to tell these people that nothing has fundamentally changed in my personality through these processes, I have always been who I am now, you just now start to notice all that i couldn’t show you for years.

As I imagined the end result, it surpassed my expectations, at every step I felt that not only was my body changing but also my mental state was changing and I was becoming a better person, with a calmer and happier life, I remember people around me saying that now they got why i was so heartbroken this whole time.

I returned to Georgia in 2019, I wanted to change my name in my passport and I did not meet any resistance, the Justice Officer was a little surprised that I was a woman by birth, but this process was not complicated, in general, the most acceptance from LGBT+ community have transgender heterosexual men because they look like heterosexuals and, as a rule, heterosexual men enjoy the most privileges. After changing my gender, I realized how much my life has become easier, how different they look at me when I speak, they hear differently, which surprises me a little because I speak the same, although I am already a man to them and deserve different respect. 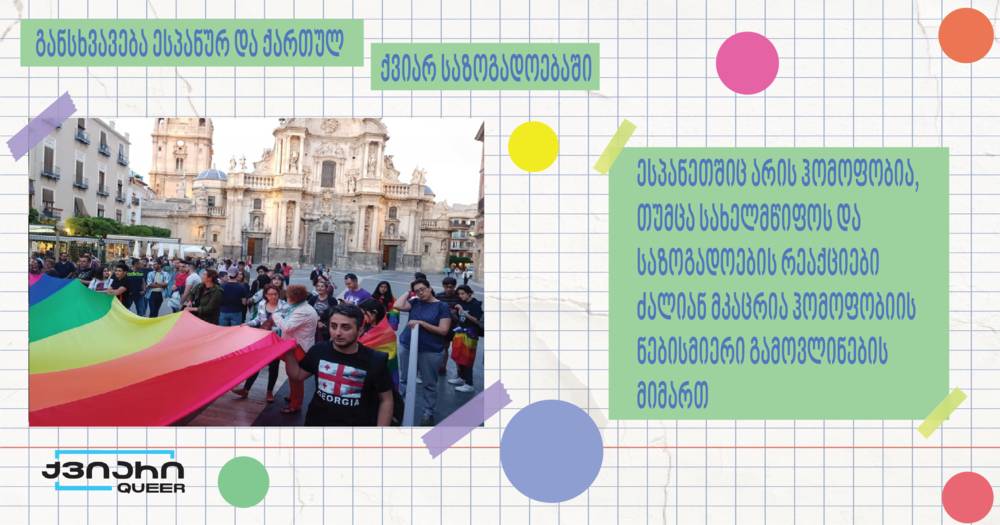 The Difference Between Spanish and Georgian Society and the State Services that Transgender People Receive:

The Spanish LGBT community is steps ahead of the Georgian LGBT community, they are already accepted and bolder, the main purpose of life here is no longer to gain rights, their main goal is life and happiness, no one thinks about survival here, they know they have no limits and are protected, there is homophobia here too, however the reactions of the state and society are very harsh towards any manifestation of homophobia, the law applies and homophobia will not go unpunished. The Georgian approach does not work here, as if LGBT people should give up something and take into account the will of the majority. Here all human rights are protected and no one gives up anything.

Nowadays, in Spain when it comes to reviewing sex policies, accepting non-binary people and admitting the third sex, activists are working very hard to come up with articles denoting the third sex and the language to be more adapted to modern challenges. In Spain, there is a Ministry of Equality that works very effectively on LGBT issues, and its female minister is very much trying to pass a law that will further simplify the transition process, the process of changing the gender mark, and so on.

And most importantly, unlike in Georgia, where transgender people fail to see a doctor before they begin the transition process and often prescribe hormones themselves without the intervention of specialists and specialists, Spain has a very efficient health care system tailored to the needs of LGBT people. Gender reassignment procedures are free in almost all regions of Spain, the insurance applies to both Spanish citizens and people who simply have the right to reside or live on Spanish soil without this right. 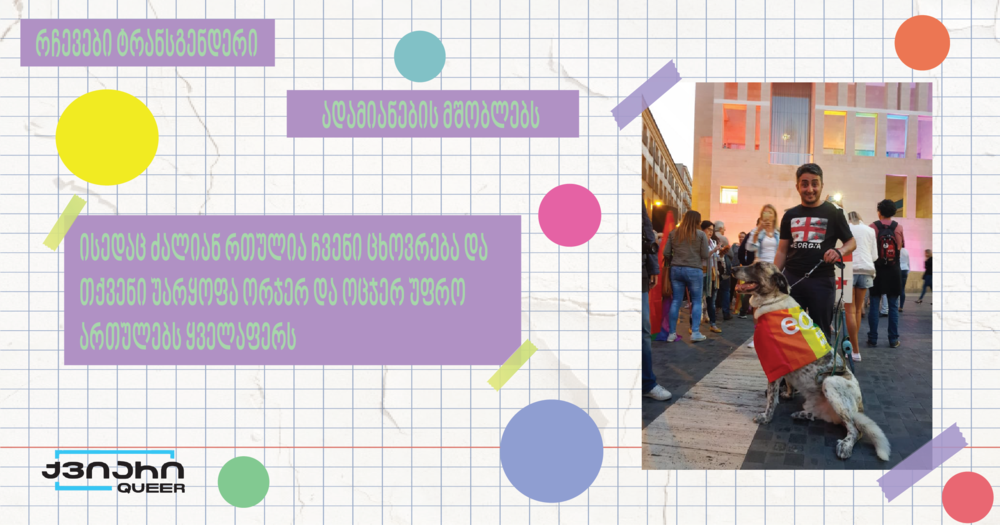 Tips for Parents of Transgender People

Recently, there was one such case when the parent of a 6-year-old transgender girl who changed the education system and bothered a lot of people to change her child’s name in a school magazine, I have never seen such devotion and protection of a child in Georgia, not only from transgender parents, from the parents of heterosexual people.

The first interest of the parent should be the happiness of the child and the answers to this should not be sought in society, neighborhood and kinship, the child themselves knows when hey is happy and what they wants, we should listen to our children and understand how they imagine their own happiness, the child is not a project that you write in advance what and how should happen in their life, such projects are always waiting to fail, there will never be a happy person whose life was written by the parents without communication with the child and without considering the needs of the child. They will be an unhappy child.

Our life is already very difficult and your rejection complicates everything 100 times over, the therapy helped me a lot to overcome a lot of difficulties and one of the difficulties was that I still do not have a relationship with my parents. No human life is perfect without family support, family support means that whoever opposes you and whoever does not run away from you, family love will still be enough to make you feel happy, do not deprive your children of this support. We, as humans, need recognition first and foremost from our family and loved ones, if we do not get it, no sense in any therapies and help from psychologists, our lives will still not be perfect. 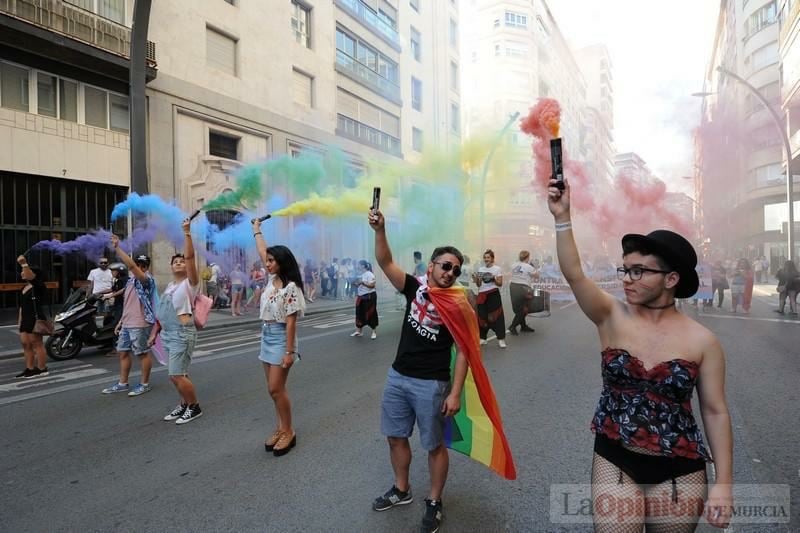 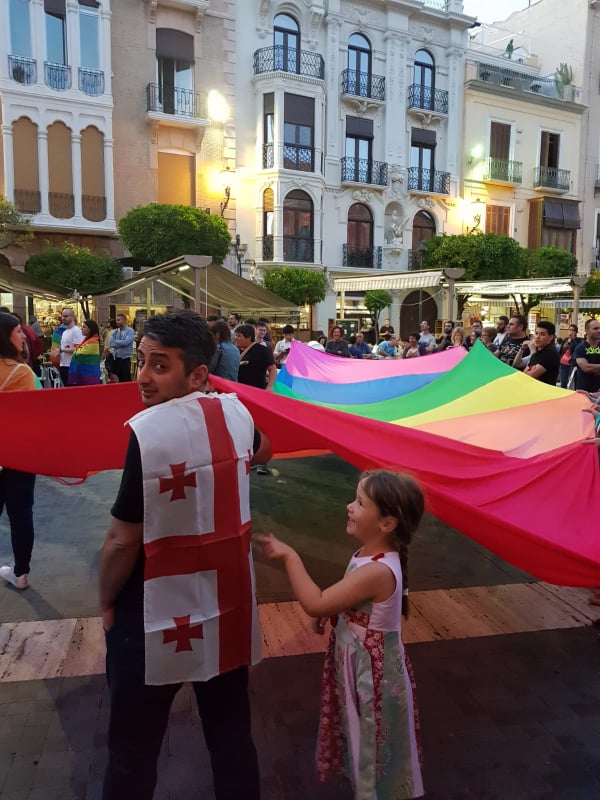 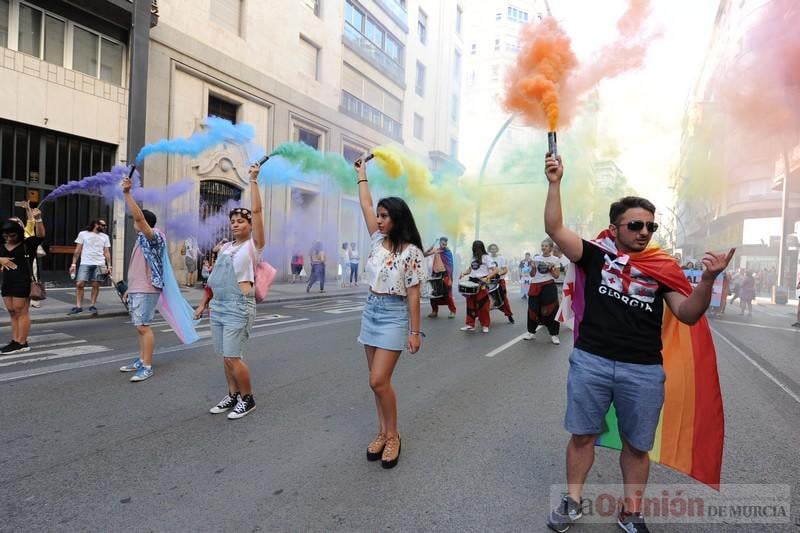 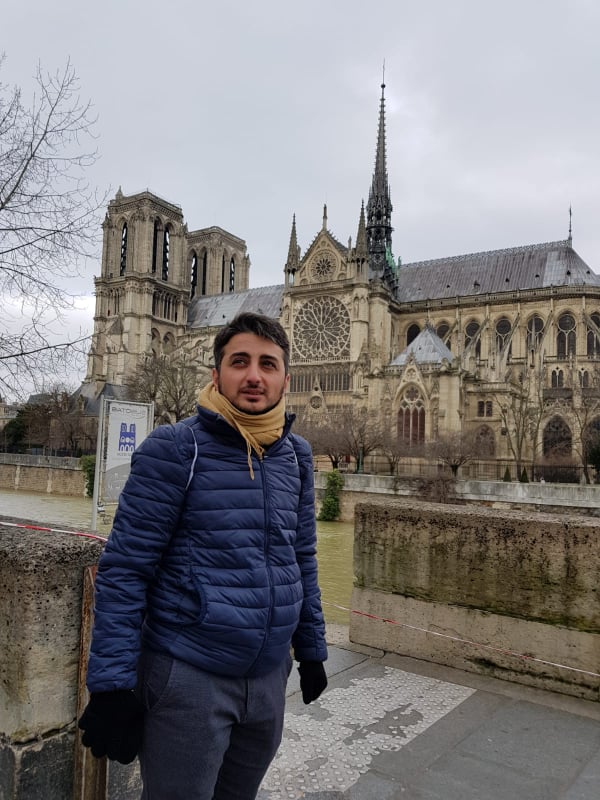 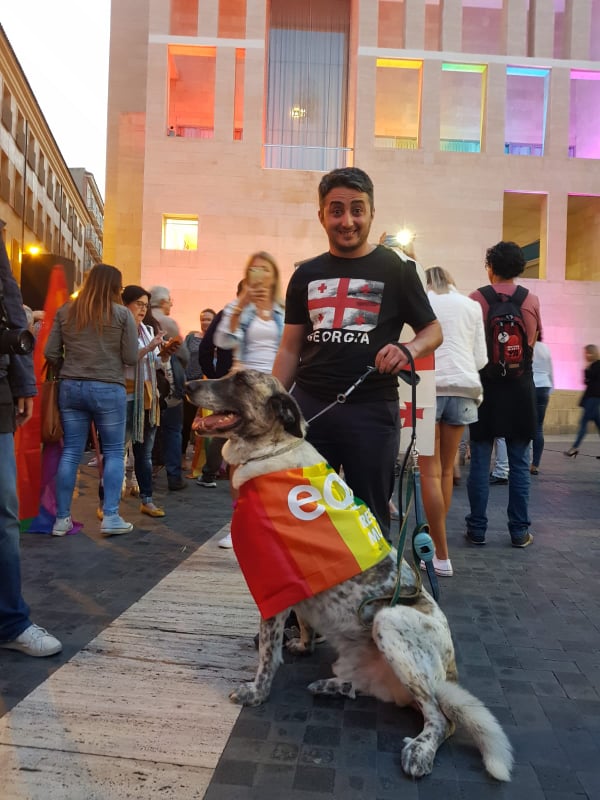